The Ukrainians have been demonstrating a colossal ability in the information war. Here is the press conference of three Russian prisoners of war. They reveal interesting aspects of the war’s ongoing operation. A war that started already in 2014.

It’s been 12 days of the Russian escalation of the 2014 war agains Ukraine. The situation hasn’t changed much in the last days. What’s new is combat taking place in Izyum (SE of Kharkiv) and the area of Russian control NW of Kyiv has expanded towards Korosten.

Overall, it’s getting increasingly difficult for the Russian forces to sustain the operation. General Valery “Doctrine” Gerasimov’s nephew, Major General Vitaly Gerasimov, was killed yesterday. He was the chief of staff of the 41st Army and the operation commander in Kharkiv. It’s the second Russian general this week and the third overall. To compare how low is the probability of general officers dying in combat, the only American general to die during Afghanistan and Iraq was Major General Harold Greene in 2014. If they’re sending generals to the field, a fair hypothesis is that they are running out of mid-management. Besides, the soldiers seem to have very low morale, and Ukrainian resistance is incredibly strong and creative. The Ukrainian forces were able to destroy 35 Russian helicopters in an attack against the Kherson airbase.

There are many problems with logistics and equipment. Besides running out of gas and diesel and equipment braking because of poor maintenance, some examples are:. The Su-34 are using 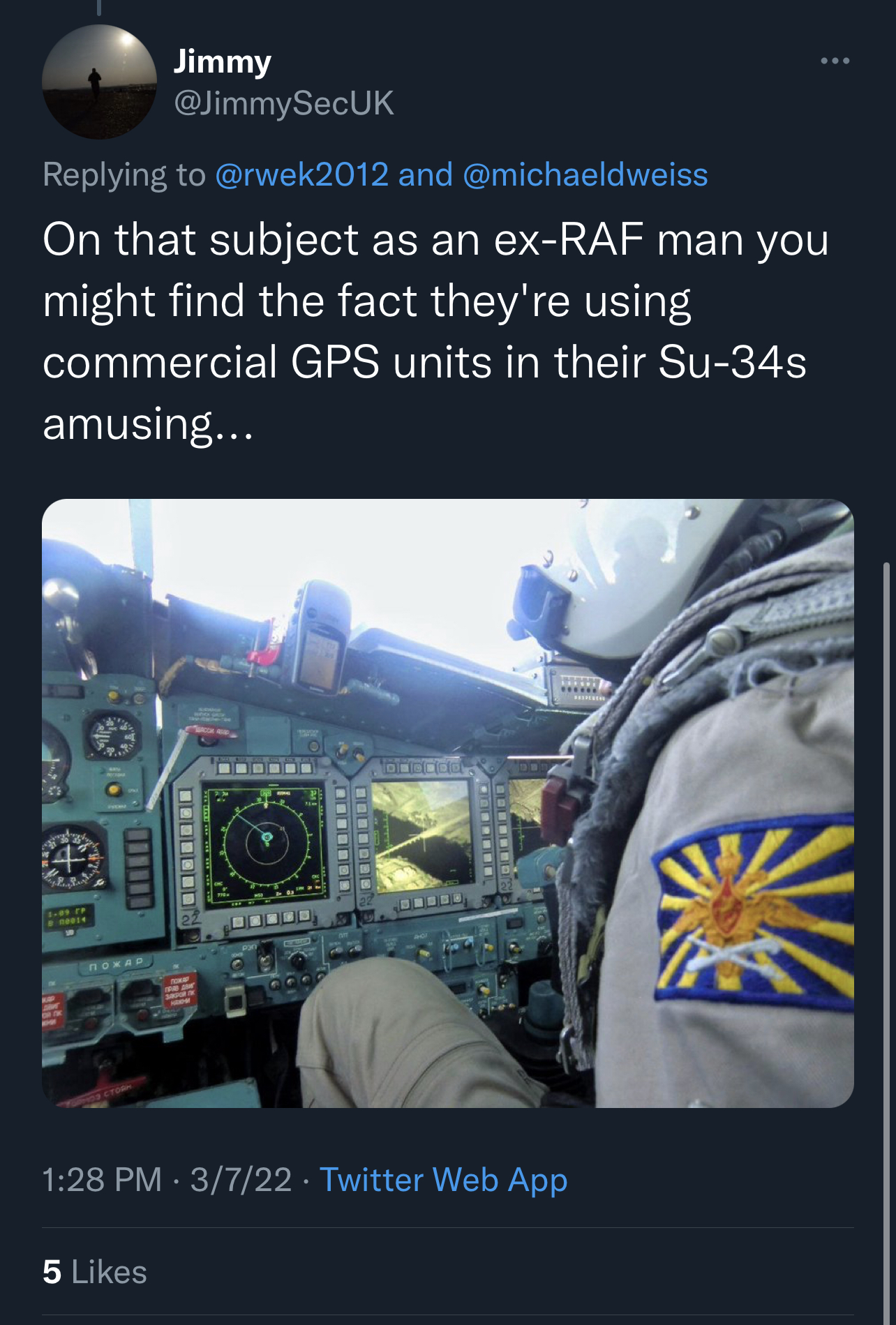 commercial GPS kits in their cockpits that seems to be made in the USA. This might support my hypothesis that they didn’t have transponders either, when some dangerous episodes of Russian jet fighters and commercial airliners getting to close happened some years ago. This compromises operational security. The very expensive crypto-phones ERA introduced by the Russian MoD in 2021 – and guaranteed to work in any condition — aren’t working. They need 3G/4G and Russian troops are destroying cell towers. Thus, they are equipped with secure phones that don’t work in the areas they operate. Soldiers are receiving food rations that are out of validity. In some cases, since 2015.

That said, it is necessary to consider that Russia is still much stronger than Ukraine.

At the political level, it’s possible to see that Russia is reducing its demands. Yesterday, they were three:

Ukraine refused to accept. New negotiations are expected to be held this Thursday.

The Komsolmolskaya Pravda published a “debate” between a journalist and a “political scientist” showing three possible scenarios for Ukraine:

1. Optimistic plan: Ukraine remains in its current size (minus the territories of the DPR and LPR within their administrative boundaries).For that, Ukraine would have to:

i. officially recognizes the Crimea as Russian territory and the independence of Donbass;

ii. introduce into the constitution a provision of neutrality and non-alignment;

iii. the renunciation of nuclear weapons;

iv. extradite war criminals at the request of the Investigative Committee of the Russian Federation;

v. fixes the position of the Russian language as the second state language.

Create several formally independent republics similarly to the DPR and LPR, on the basis the of predominantly Russian-speaking regions of historical Slobozhanshchina and Novorossiya – Kharkiv People’s, Dnepropetrovsk, Zaporozhye, Kherson, Nikolaev and Odessa At the second stage, at the unification congress of people’s representatives, they, together with the DPR and LPR, as well as Pridnestrovie, which will join them, can declare the creation of a new independent state that is in close allied relations with the Russian Federation – Novorossiya.

If the “special operation” becomes irreversible and completely uncontrollable, Novorossiya and Little Russia  will simply enter Russia as republics, territories and regions. Romania and Hungary will be able to claim Bukovina and Transcarpathia, and Poland will be able to claim six western regions.

DISCLAIMER: This list might be correct, but it isn’t wholly trustworthy. Take it with a pinch of salt.